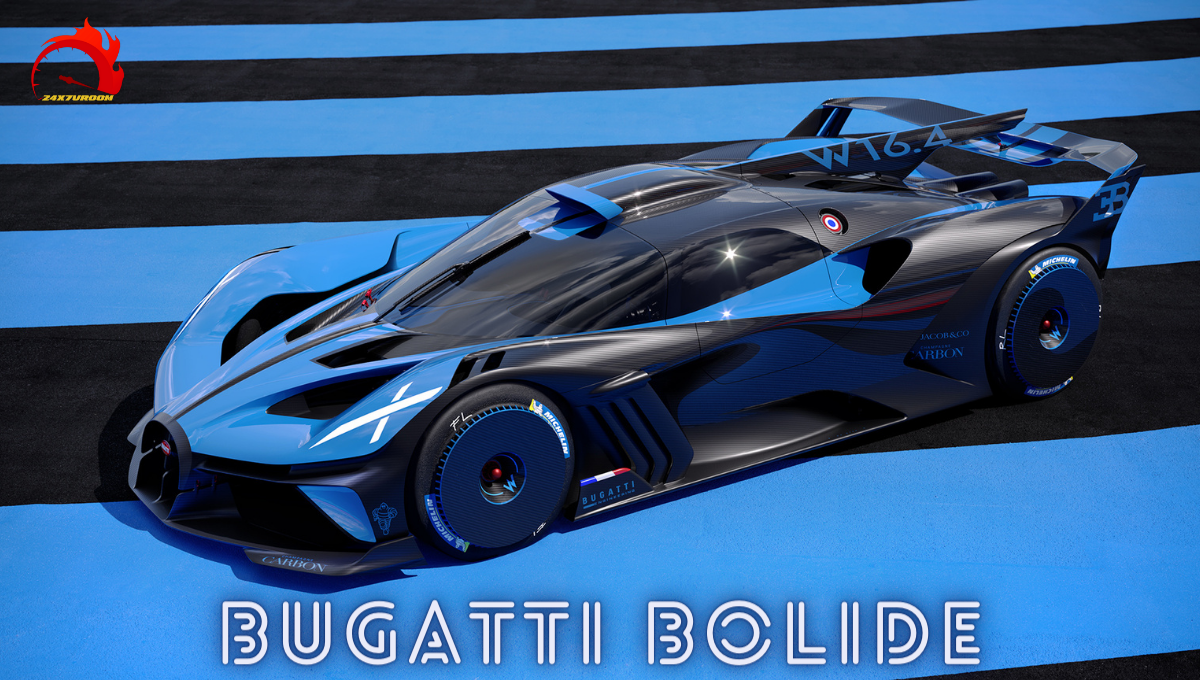 Bugatti Bolide is undoubtedly one of the fastest cars on the planet. The big news at Bugatti for every luxury car enthusiast is that the French automaker is making the unmatched Bolide hypercar concept for purchase. The car is loved and accepted by potential customers, and this love has made Bolide being voted the most stunning hypercar of the year.

It is a limited-edition hypercar, and no one could have thought that this version could turn into a reality. But here it is and is expected to arrive in the year 2024. A track-day-focused sports car, The Bugatti Bolide is developed in Wolfsburg. The brain behind it is the French automobile giant- Bugatti Automobiles. According to Bugatti, Bolide’s concept version uses the W16 engine having a weight-to-power ratio of 0.91 kg/kW. Bugatti also announced that this would be the last car manufactured by them that will use the W16 engine.

The name Bolide is derived from the French word ‘le bolide,’ which actually means “the racing car.”

It is an uncompromising experiment full of exclusivity to impress everyone with high performance, a driving experience, and low weight that will give the entire driving pleasure a new dimension. Driving the Bolide will be like riding on a cannonball.

How much does the Bugatti Bolide Cost?

Since the Bolide is just a track-only creation, the manufacturer has thought to provide exclusive track days to guarantee a safe environment and gradually make the customers familiar with the hyper car’s breath-taking performance. All said and done, there is no vehicle that can compete with the Bolide, and there cannot be a real-world comparative test for the vehicle. So how much does the Bugatti Bolide cost? At the current exchange prices, the asking price for Bugatti Bolide is €4 million, which equates to about $4.7 million. If you are willing to spend this amount, then you can be a part of the 40 Bolides that are set to be built. This lightest and craziest Bugatti will only appreciate in value.

Is Bugatti Bolide the fastest car in the world?

With a top speed of 310mph, Bugatti Bolide ranks among the top 5 fastest cars in the world. After tasting the success of the Chiron Super Sport, the manufacturers decided to revamp the design. The innovative auto house worked hard to outperform itself. However, doing so seemed difficult as the SuperSport 300+ was like perfection on wheels.

There came Bugatti Bolide, that answered all these questions. The vehicle is an 8.0L W-16 motor vehicle with 1825 horsepower and an amazing 1364 lb-ft torque.

The Bolide is truly a hypercar that is going places. Bugatti’s Bolide is a true lightweight hypercar portraying the vastness of Bugatti’s empire. It defines the best in terms of power, beauty, and innovation. It uses the same bespoke engine as the storied Chiron line. The only difference is that its engine has more turbo to escalate the effect. The marvel will show the world the capability of a W-16 motor in the true sense. Bolide is light, futuristic, and tiny. It stands 39.2 inches off the ground with a top speed of 498 kmph or 310mph. The supercar can reach 0-60mph in just 2.17 seconds.

Supercar maker Bugatti has developed the best experimental prototype available in a £4.1million limited edition meant just for the track. The car was unveiled in the Pebble Beach car extravaganza and displayed at The Quail. But the difference is that just 40 new Bugatti Bolide is to be built with deliveries starting from 2024.

The Bolide gets its name from a French slang that translates to “a fast car.” The hypercar by Bugatti is light, extreme, and unbelievably fast. The car costs about £4.1million plus 20 percent tax. The 40 Bolides are not road-legal and will be just for track use. The all-new Bolide comprises a 1,600 horsepower, 8.0-liter W16 petrol engine. The vehicle is expected to accelerate from zero to 60mph in just about 2.17 seconds with a top speed of over 310mph.

The Bugatti Bolide is a hyper sports car with maximum downforce and minimal bodywork. The car’s lightweight construction makes it look like a Formula 1 car with a scoop on the roof, a huge rear diffuser, morphable outer skin, a rear wing, and better aero efficiency to enhance performance and traction. In addition, the carbon fiber is more exposed in comparison to other Bugatti.

There are X-shaped running lights in the front that may not give a clear shine on the road, but it does not matter much as it is a race car. The magnesium wheels suck hot air using the ceramic braking system, and the wide wing at the rear goes up to the LED taillights merging with the quad-exit exhaust. The central fin is also quite dramatic. The wheels are partially covered, and the diffuser takes up some of its widths. As just a track car, this design will continue to be radical.

Bugatti Bolide comes with the 8.0-lt quad-turbo W16 engine, seven-speed automatic gearbox, all-wheel drive, and dual-clutch box, as found in other Bugatti vehicles. The Bolide boasts a 1,364 lb-ft of torque and 1,824 horsepower, and 110-octane racing fuel.

Bolide could do 0-60 mph in less than 2.17 seconds and 0-124 mph in a mere 4.36 seconds. The car’s top speed is above 310 mph, and it is able to go from zero to the top speed and then back to rest in 33.62 seconds. That sounds like some incredible aerodynamics, and the developers want to see the Bolide in line with the much-needed FIA safety standards. The car will weigh about 3,195 pounds with an automatic fire extinguishing system, six-point harnesses, pressure refueling, and a HANS system to ensure driver safety.

The cabin of Bugatti Bolide is quite basic, but it is still quite appealing. Bugatti Bolide can be seen having a small screen near the steering wheel that is U-shaped. Quite a few switches and buttons are placed on the wheel. The car has a central control panel and rearview cameras placed in the exterior wings so that all interior rearview mirrors are screens. The drivers will have access to numerous power levels behind the wheel. The car comes with no climate control, no airbags, and no media system.

This is the reason why this car is lightweight with a focused appearance. Being lightweight is the core focus area, and the driver seat will be molded with the steering wheel and pedals being the only moveable parts. The cabin of the hypercar could be custom-built as per the buyer’s specifications.

Which celebrities own Bugatti Bolide?

There is a long list of celebrities with Bugatti. Being a status symbol brings along fame and popularity. These celebrities have a love for nice cars. A lot of them own almost every luxury vehicle. The list includes well-known athletes, actors, and musicians who own Bugatti. Most celebrities also get their Bugatti customized as per their taste and get individualized features.

So let’s talk about some famous people who own a Bugatti. The famous actor Tom Cruise is on the top of the list. Cruise made a mark by arriving in a Bugatti Veyron at the movie premiere of Mission Impossible III. He is well-known for his love of fast cars and has an exceptional taste in cars. Another well-known celebrity is Beyoncé Knowles, who gifted her husband Jay-Z a Bugatti Veyron on his 41st birthday. Xzibit, Chris Brown, Birdman, and The Game all own a Bugatti.

Talking about athletes, NFL player Tom Brady and soccer star Cristiano Ronaldo own a Bugatti. Ronaldo also raced one on foot while doing a Nike advertisement. Other soccer players like Tim Cahill, Roberto Carlo, and Samuel Eto also own Bugatti. Other celebrity owners include Floyd Mayweather Jr. and Jay Leno, who flaunt their black, white, and red Bugatti.

Yes, Bugatti Bolide is a track-only hypercar with a top speed of 310 mph and 1,825 horsepower. The concept car made the headlines in 2020 as the company was about to unveil the jaw-dropping design and impressive technical specifications.

How many is Bugatti Bolide made?

Bugatti is set to build 40 Bolides in all that will be priced at 4 million euros. The company states that Bolide will see a production maturity in the next couple of years. The delivery starts in 2024.

How many people own Bugatti Bolide?

Only 40 customers will own Bugatti’s Bolide hypercar. Bolide is a R70-million, 1361kW beast. Bugatti presented the Bolide concept back in 2020, and the production will be limited to just 40 units. The models has already been sold out.

S580 Mercedes: Price, Speed, Specifications, And Everything You Need To Know More About This Supercar