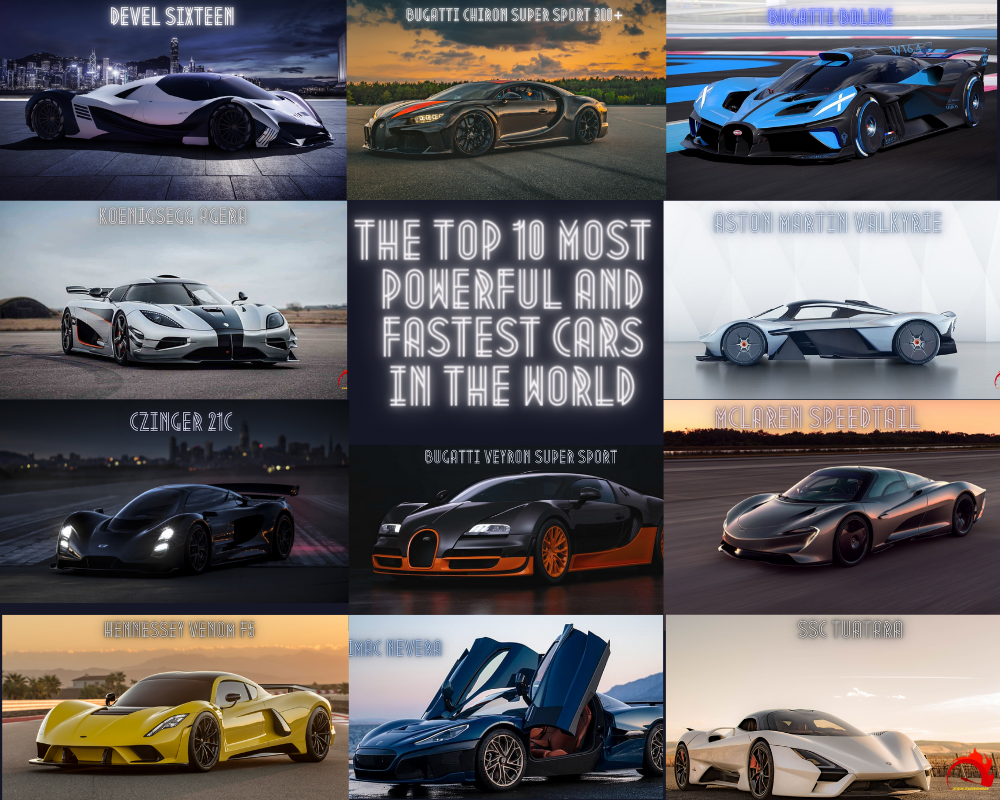 The 10 Most Powerful and fastest cars in the world

Take a glance at the top ten fastest cars globally in 2022. These are impressive but limited-edition vehicles. The engine power is more than 1000 horsepower. Also, the cars have been designed specially. As a result, they can break world records by reaching a speed of 450 km per hour. Ready for some adventure? Keep scrolling.

The top 10 fastest cars are:

The top 10 fastest cars in order to their speed:

Here’s a glimpse of the fastest car of 2022. The amount of speed and power is unheard of before. Devel Sixteen aims to smash all the records posed by other cars. Further, the top speed is claimed to be 348 mph. The next speed standard of 350 miles in an hour.

Also, Devel Sixteen stares down the next speed standard: 350 miles per hour. It was first debuted in the market in 2017 in Dubai. Devel Sixteen is incredibly powerful with a V16 12.3 L engine. Also, the horsepower is 5007.

The Prices for the three declared variants are the first variant $1.6 million, the second variant $1.8 million, and tried and latest variant is $2.2 million US dollars. And if the stats are confirmed in the actual model, this car will beat many others. Moreover, Devel Sixteen may rise to become the fastest car globally.

This race-ready supercar is the fastest car in the world for 2022. The model was unveiled in 2020. Besides, the carbon fiber and titanium components are utilized to boost speed and acceleration.

Also, Bugatti Bolide accelerates from 0 to 100 km per hour. The time is around 2 seconds. However, the company will produce only forty vehicles. And the deliveries will begin in 2024 with a price tag of 4.7 million dollars.

This France-built supercar is stunning. It is meant to become stable and achieve optimum aerodynamic efficiency. So even if the speed exceeds 420 km per hour, it slides perfectly. The vehicle’s weight is 1970 kg and 4.7 meters.

The W16 engine is 8 liters. Then, it produces 1600 nm of torque and 1600 horsepower. Chiron Sport accelerates from zero to 100 km per hour. The top speed is 490 km per hour. But, the time taken is 2.3 seconds. Bugatti will build only thirty models of Chiron Super Sport. The price will be around three million dollars.

Here’s a supercar of a higher power. It is built in the US to become the world’s fastest automobile. So, the weight is 1360 kilograms and 4.6 meters long. The vehicle boasts a V8 engine of 6.6 liters producing 1617 nm of torque. And around 1817 horsepower.

The top speed of Hennessey Venom F5 is around 484 km per hour. The time is 2.8 seconds. The acceleration is from 0 to a hundred km per hour. So, the company will produce many chassis models. The prices will start from 1.8 million dollars.

Created in the United States, SSC Tuatara is a super sports car. It is designed to generate precise downforce and reduce drag at high speeds. Also, the car’s weight is 1247 kilos, and the length is 4.6 meters.

The engine of SSC Tuatara is a V8 of 5.9 liters. That also produces 1818 nm of torque and 1750 horsepower. Also, the speeds achieved are over 455 km per hour. Besides, it can accelerate from 0 to one hundred km per hour.

The timing is around 2.6 seconds. This year, the company will produce only one hundred machines. And the price will be around 1.9 million dollars.

Here is a limited-edition Swedish-made automobile. The chassis is built of aluminum and carbon fiber. Also, the model is designed to offer maximum adaptability on the track and road. The weight of Agera is 1295 kg, and it is 4.2 meters long.

Also, the top speed is four hundred and forty-seven km per hour. The weight of Koenigsegg Agera is 1295 kg, and the length is 4.2 meters. Each unit costs more than two and a half million dollars. And only twenty-five units are available.

Created in the US, here’s a hybrid car of the next generation. It was created using AI or artificial intelligence technology. So, the weight is around 1240 kgs. Its chassis is computationally printed, assembled, and designed.

The V8 engine is 2.88 liter. The torque produced is 1439 nm, and the horsepower is 1250. Moreover, the top speed is 432 kilometers per hour. The vehicle accelerates from zero to one hundred km per hour in just 1.9 seconds. In 2023, the company will produce Czinger 21C. But, only 80 units. And the estimated price will be 2 million dollars.

Looking for a super-face high-end car? Here’s one. Bugatti Veyron Super Sport has unique components. These were produced in 2010 in France. The weight is 2200 kilos, and the length is 4.4 meters. Besides, the engine is an 8-liter W16. It

The top speed of this vehicle is 431 km per hour. It accelerates from 0 to 100 km in nearly 2.5 seconds. The suspension and chassis were designed for stability and strength. Further, the estimated cost of the vehicle is 2.4 million dollars. Bugatti Veyron set the world record for the fastest sports car in 2010.

The world is more interested in producing electric vehicles. That is because it will make the planet safer. Also, it will be exciting to have the fastest cars in the world, 100% electric supercars. The top speed is two hundred and fifty-eight mph.

Then, the acceleration is 0-60 mph, and the time is around 1.85 seconds. Just as gas-powered vehicles, even electric vehicles can race fast. Rimac Nevera comes with electric motors (four). It produces 1741 lb-ft torque and 1914 horsepower.

Another limited-edition vehicle built in the UK is McLaren Speedtail. It is a hybrid designed to increase aerodynamic efficiency. The best part is the driver can recharge it while riding. So, the car weighs 1430 kilos and is 5.1 meters long.

The engine is a four-liter V8 with an electric motor. With 1150 newton meters and 10400 horsepower of torque, McLaren is brilliant. The top speed is four hundred and three kilometers per hour.

Also, it accelerates from 0 to 300 km per hour. The company will produce only 106 models of McLaren SpeedTail. And the price will be 2.2 million dollars.

Here’s a high-performance, superlight vehicle. It was built in the UK. This car resembles the Formula One car very closely. Besides, the body is made entirely of carbon fiber. The weight of the Aston Martin Valkyrie is 1100 kilos, and its length is 4.8 meters.

Its engine is a 6.5 liter V12 and produces 1140 newton meters and horsepower of torque. The top speed is 400 km per hour. Further, it accelerates in three seconds from 0 to 100 kilometers. For the road, 150 units have been certified. And for the circuit, the car offers 25 units. The vehicle’s overall cost is around 3.2 million dollars.

Other fastest cars in the world

It is one of the fastest-running cars in the world. Ferrari’s first car to use the FI-derived 963CV hybrid engine. Also, the brand’s innovation is reflected in its aerodynamic design and ideal weight distribution.

Reach speeds around 217 mph. The vehicle goes from 0 to 62 miles per hour in around 3 seconds. Besides, Ferrari released the model in 2013. Only four hundred and ninety-nine cars are produced. So, it’s truly exclusive.

The top speed of Pagani Huayra is 238 mph. And that can place it among the fastest cars across the globe. Between 2012 and 2018, only 100 units of the original Huayra were produced. In the variants, however, more variants have been made.

The power of this car comes from the 750 hp Mercedes-AMG. It has a turbocharged V12 engine. So, in around 2.8 seconds, the acceleration goes to 62 mph. Pagani Huayra also uses an active aerodynamics system. The four operating flaps are used to drag and balance downforce.

Many of the world’s fastest cars come from Europe. However, this twin-turbo model from Saleen is from the US. The model was hand-built in California from 2000 to 2009. Besides, the top speed of this car is 248 mph.

It accelerates from 0 to 60 mph in around 2.7 seconds. Also, thanks to the carbon fiber body, the weight savings are excellent. Then, the downforce increases, and drag is reduced because of the aerodynamic features.

When it comes to the fastest cars, top speed matters the most. These powerful and fastest cars present the future of automobiles, in sharp contrast to the yesteryear vintage cars of the world. But, apart from that, acceleration is important. It ranges from 0 to 60 mph (that’s a realistic figure). And most of all, creating metal hunks requires a lot of expertise. Only the fast cars of professional brands can equip them.

Which Is The Fastest Honda Model In The World?

The Ultimate Guide To Microfiber Car Cloth For Cars

Manual Vs. Automatic, Which is The Better Car in 2023?