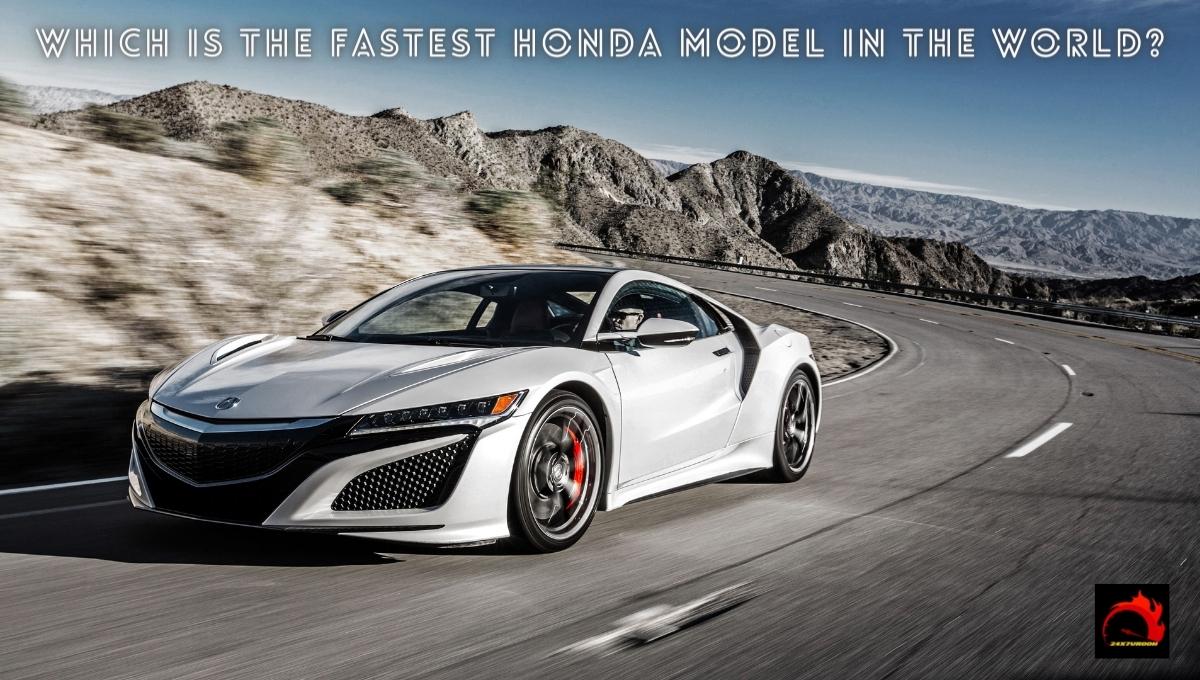 Which Is The Fastest Honda Model In The World?

Honda cars are economical, reliable and fuel-efficient driven. Every second person opting for Honda cars makes them both luxurious and classy. Honda also has a long list of sports cars, but the focus is more on economical cars because Honda prefers to be a part of every home.

Some of the cars provided in this catalogue have been stopped in the market, but yet we give a gist of them to our readers to tell them that Honda has always produced massive cars with quality and high speed generation. Here we present to you the top 9 fastest Honda models, and then you can pick the fastest Honda model amongst these choices.

The fastest Honda car is Honda NSX or Acura NSX Second Generation with a massive speed of 191 MPH, the highest in the list of the fastest Honda cars. It was released in 2022 and is considered one of the best cars that Honda has ever introduced in terms of speed on the road. The Honda NSX is marketed in USA as Acura NSX.

Though the design was a little comprehensive and complicated, it was well appreciated by Honda lovers, and the public made it one of the fastest Honda cars in the world. Its best features include a twin-turbo with a 3.5-litre V6 engine working on a nine-speed four over 600 HP transmission. And if asked to range the cars mentioned in this list and the world, then Honda NSX is one of the fastest of Honda car running on the road lately.

The GT500 model is set to be one of Honda’s best sports cars and a street-legal car. It provides an MPH of 186, and it’s good for the race and the gears. In addition, it has a speed that can make it a good speed Honda car because its looks and designs are again aerodynamic and study, and it gives you a feel of being inside a sports car with elegant and smooth functioning.

This model was one of the longest-running models of Honda that provided a speed of over 170 MPH. But you know the back story of this model? Formula One legend Arytin Senna Himself was a part of building this sports car for Honda.

When you have a legend from the Formula One championship helping you build a sports car, nothing can go wrong in the results. Then, finally, its massive motor hit the road, and people were stunned to see such a design. The NSX lasted in the market for over 15 years, wherein it was introduced in 1990 and lasted up to 2005.

Civic Type R has a speed of 168 MPH, and though this car is not regarded to be the best in speed, its a turbocharged offering of 300 HP into a 2 liter 4 cylinder gives it an edge over the other models presented by Honda in the same line.

The transmission is top-notch, and the looks are killing because the overall dynamics of the car are designed to make it look like a speed car. And provide you with the fields of driving a sports car. For all those not into gushing over the speed, having a car that gives you the fields of it is much better.

This model has a speed of 149 MPH, and it is a better version of the Musta Miata presented by Honda. It is stylish and gives you a mini roadster feeling, and has an engine that incorporates a four-cylinder 2.2-litre VTEC.

This engine has the power of generating up to 237 HP, and given the time of its introduction in 2000, making it a millennial of Honda, it was quite an in fashion. It was opted for by most Honda enthusiasts for its tremendous speed, given the size of the car.

Honda came up with massive and interesting combinations in 2000 as it was a million all year, bringing about a lot of excitement in the automobile industry.S2000 CR is one such model set to be the best model for speed ever produced by Honda. The fastest speed this beauty can acquire is 153 MPH.

You could take turns from, say, zero to 60 HP in just 5.7 seconds, which is this amazing model’s speed. Moreover, it gives an edge over all the models because it has a convertible option and its fun style look that adds a statement to its overall design.

With a sleek and lighter automobile design, this model would catch the eye of every pedestrian on the road.

The model was quite advanced for its time as it presented a futuristic model by Honda and gave people a desire to have their hands on a car with a speed of 148 MPH. This introduction was challenging because back in the days, such a model and speed for any economical sedan weren’t quite in vogue, yet the Si VTEC model pulled it off brilliantly.

Type R of Integra was launched in 1995, was in the market up to 2001 and has been regarded as one of Honda’s best sales. Its features include a 1.8-litre DOHC VTEC Incorporated over a four-cylinder that generates under 200HP. It has a top speed of 148 MPH.

It is quite a good car for anyone looking for a more than moderate speed while ensuring that the speed is limitless and controllable. This is the specialty of any Honda car. It provides speed and reliability and, at the same time, ensures that the speed is within a limit to give you a safe drive.

Accord is not a speed call, but its interaction in 2017 changed this car’s full manual and automatic transmission. So there was a transformation brought in this car that changed its manual transmission into a sedan sports version. The Top speed of Accord EX-L Coupe is 134 MPH.

Best suitable for any economic person, this car is highly reliable and best selling with fast automotive technology. Though it’s not a sports car, and the speed is not as fast as any other sports car when compared to the speed machine of this sedan, it is faster than the rest of the sedans that Honda has produced.

These nine cars were presented on the basis of research and opinions from people in the automobile industry. As of 2022, the Honda NSX is set to be one of the fastest with 191 MPH. If your car is included in this list, then pat yourself because you have done some amazing job in terms of speed, but if you are looking for options to buy a Honda for its fast speed, then it would be best if you go in for the Honda NSX which was released in 2017.

The list also includes a few Honda models introduced and stopped back in the years, but the features were so good and amazing that we had to include them. Above all, it is not just the speed that gets the attention of the drivers. Still, it also depends on the technology and the engine that enhances the entire aerodynamic experience.

5 Tips for Buying a Used Car – A Comprehensive Guide

10 Things You Should Know About Electric Vehicles