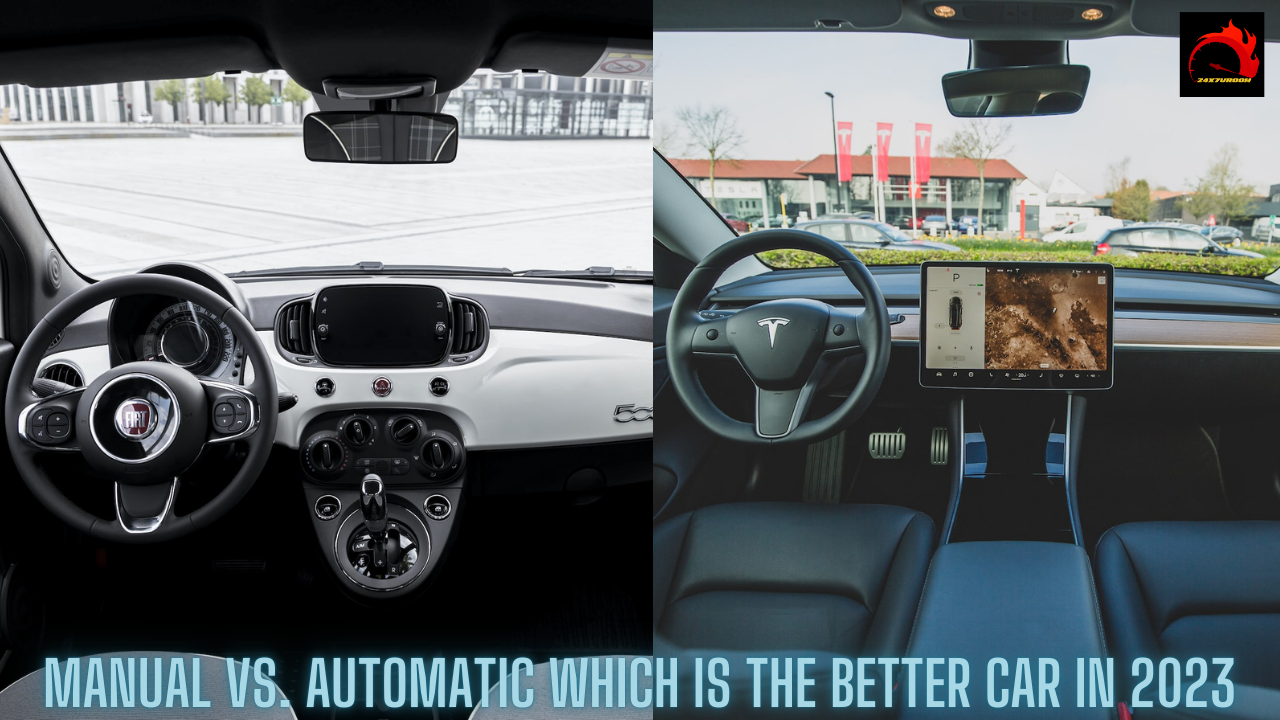 Manual Vs. Automatic, Which is The Better Car in 2023?

No one knows what the future is like, but it’s safe to predict that it will be unique with high-tech cars. Manual Vs. Automatic, this question always haunts the car enthusiasts, who are often confused between the two. The evolution from manual to automatic cars with AI integration is also fairly new to the business. It has become the talk of the century, with many automobile enthusiasts overjoyed with its advent in society. While one might argue that the time for manual cars has come to an end, it is not exactly true.

Many people still enjoy the manual transition of the gear instead of the automatic one. In fact, getting a driving license demands that one is well versed with a manual geared vehicle instead of an automatic one.  Before comparing Manual Vs. Automatic and which one is better, you can take a look at the top five Manual cars and top five Automatic cars globally.

Manual-geared cars are still the fuss in the 21st century. A huge percentage of the population still relies on manual-geared cars due to multiple reasons. One of the major reasons why people still opt for manual-geared cars is because they are quite familiar with the system. The entire system feels like an instinct, and some complain there is no need for an automatic car.

While automatic cars are good, the generation that will use automatic cars will no longer have the instincts to change gears like their successor models. Besides, check out these top manual-geared car collections.

This German-origin car is quite sturdy and has a modern design. The smooth gear transition offers great mileage (27-28 mpg). It is budget-friendly and offers an economical luxury. It is affordable and the best at this price.

Subaru WRX is also the best at its price of around 30 grand. It has a powertrain and a new platform. Besides this, unlike other Subarus, it has a revised interior. The Subaru also has a fun-to-drive character.

The Honda Civic is a classy car with a modern design by Honda. It is sleek and also offers great mileage at its price. It also has adaptive cruise Control. Apart from this, it also has a new type R performance model.

Kia Forte 2023 is a compatible sedan and has a neat look. It is one of the best manual-geared cars owing to its design, technology, mileage, specifications, and price.

Cadillac CT4-V is also a great deal for its price and the mileage it offers. It is one of the widely chosen automobiles with a manual gear system. Manual gears are still making it in the market, and it still has a long way to go.

Automatic cars are still in the development phases. There is still a lot of improvisation happening with automatic cars, specifically with AI integration, electric cars, futuristic car dashboards, and more. Automatic-gear cars are quite easy to operate. Gen Z is quite interested in automatic cars since it is easy to use, and some manual car lovers are also switching to automatic ones. Here are some of the top automatic cars

It isn’t surprising to have Tesla at the top of the list. Tesla is still in the growing phases of establishing a strong global presence. The Tesla Model 3 has autopilot capabilities and has an impressive specification. It is quite expensive and allows a look at the future of the automobile industry.

The BMW 3 series has a powerful diesel engine and a perfectly calibrated automatic gear system. The car is stud quality and has a fantastic build with state-of-the-art engine systems.

Volkswagen never fails to disappoint. Its automatic car models are also amazing, with great mileage and gear calibration. It is smooth and has great speed.

SUVs are underrated, especially automatic ones. This is a great model considering its specifications, mileage, and its cost. The Cutroën C3’s debut in the market is a game changer for SUVs.

Luxurious car brands never fail to disappoint. Porsche has done it again by introducing this amazing model. The Porsche 911 Coup is a great car with automatic gear systems.

Well, now that you are aware of the various car models under manual and automatic ones, it still seems like a tough tie. Both automated and manual gear cars are great and mainly depend on personal preferences. It would also help to check out some of the myths involving manual gear car systems.

When the time aspect is factored into the preferred gear system, a lot can be discussed. For instance, upgraded highway systems, bills being passed, and more clearly favor, the dominance of automatic gear cars in the future. Many manual geared car systems use diesel and petrol, which will soon be taken out as a primary energy source for powering engines.

Renewable energy bills are at the forefront of this change. Most of the automatic geared cars released are hybrid types and rely on batteries for their power. This is the favored power source in an attempt to establish net-zero emissions.

Of course, another factor apart from the time that can govern your decision is a personal preference. As mentioned previously, many prefer manual-geared cars as they are quite comfortable with the system. It is intuitive to drive, considering the hours of driving and practice before. People who have driven manual cars for ages will find the transition to be a bit difficult; however, it also differs in the personal skill of adaptability.

For those who are new to taking driving lessons, it goes without saying that the Automatic geared cars are the clear winner. One can easily learn how to drive automatic gear cars without having to change gears manually.

How to Clean Car Interior Plastic?

The Ultimate Guide To Microfiber Car Cloth For Cars