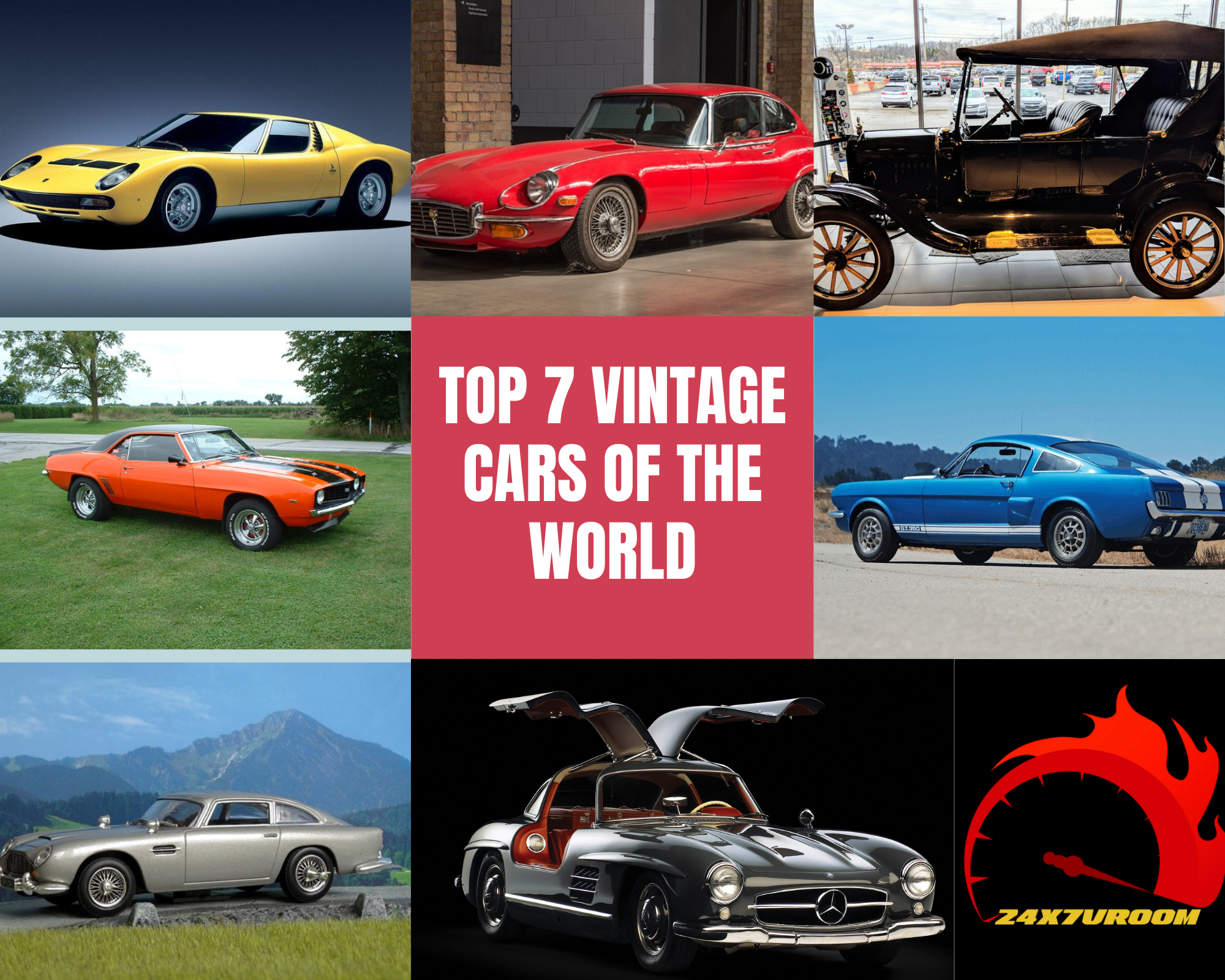 Top 7 vintage cars of the world

In a world that has a new supercar lined up every month, vintage cars are like a breath of fresh air. The class, beauty, and style of the ancient time are a delight to the eyes. They tell the story of a time that has long gone past. These cars are like a window to those bygone golden times. Yet, the vintage beauties still mesmerize the world and make you fall in love with them at first sight itself.

Here we bring you the top 10 vintage cars of the world, which still have the potential to stop the world.

The Seven Vintages Cars of The World are:

Introduced in 1908, the ford model T was the universal car model which put the globe on wheels. The invention of the Model T was due to Henry Ford’s vision to create a car that would be durable, simple to operate, and affordable. It was produced in mass, so the company was able to sell it for $260 and $850, which was super affordable to the customers. The first customer received the vehicle on 1st October 1908. There were some amazing features to this car which made it an instant success. The features included:

All these features and modern innovations made the ford Model T a cliché for urban style. Initially, the car was sold in only black color, i.e., from 1914-1925, but after that, it was available in red, green, blue, and grey. It was also popular for its nickname Tin Lizzie. More than 15 million model T were sold worldwide. Even today, after 100 years, the Model T has a flawless and timeless legacy. It is indeed a vintage beauty of every era.

This mesmerizing vintage beauty was introduced in 1954 by Mercedes. It was made legendry with the iconic gullwing door, making it the most sort after a coupe of the 50s. It is also unique as it was the first true sports car that Daimler-Benz developed after the war. In 1952 it was first introduced in Mille Milia as a sports car. After that, the road-going advancement of the Mercedes 300SL coupe began, and it was finally produced in the 1954 international motorsports show, held in New York.

Also known as the W194 300SL coupe was loaded with amazing features.

The SL in Mercedes Benz 300SL Gullwing stands for “super light” German or super-leicht. Which was to highlight the car’s tubular frame make, developed to make it lightweight and perfect for racing. This car still makes the head turn and is truly a remarkable model of excellent German workmanship.

The Jaguar E type is undoubtedly one of the most popular and stylish vintage cars of all time. It ruled the 60s with its sleek design and killer looks. It is breathtaking even today, so what makes this beauty manufactured by Jaguar cars limited between 1961 and 1974 so sought-after cars even today? Well, let’s find out.

The Jaguar E type is a killer combination of high performance, beauty, and competitive pricing, making it a craze in the motoring world. The E-type model can top the top speed of 150 mph or 241 km/h. Moreover, it could vroom from 0-60 miles or 0 to 97 km in mere 7 seconds, which was a sensation at that time. The Jaguar based this iconic model on their D-type racing car, which had the honor of winning the 24 hours of le Man’s for 1955, 56, and 57 consecutively. It is said that the legendary Italian race driver Enzo Ferrari said that the Jaguar E type was the “most beautiful car ever made.” It was named the top sports car of the 1960s by sports car international magazine. Let’s see the specifications of this mesmerizing beauty.

It is indeed one of the marvels of human engineering and truly a vintage car that takes away your breath.

Aston Martin was made famous by her majesty’s favorite agent, James bond 007. Infact the Aston Martin DB5 was the original James Bond car. It appeared first in 1964 in the Bond movie Goldfinger. Unfortunately, the DB5 that James bond used was stolen in 1997, and it is not found until now. It had the chassis number DP/216/1. This astonishing beauty was designed by Carozzeria Touring Superleggera, who hailed from Milan. In the 60s, the signature long hood and engraved headlights of the DB5 had a cult following, and people were crazy about this look.

The design of the Aston Martin DB5 was classy and sophisticated. The wired wheels and central mounted long nuts gave the car a classic look that every car maker aspired for but never achieved. The car was stylish and mesmerizing from the outside, but it was even more enchanting when it came to the interiors.

The Aston Martin DB5 had a lavish interior that endorsed a fighter plane-like instrument cluster, making it look out of this world. It had seven dials, and all were finished with metallic rings around them, which added to the style of the cluster. The dials gave the driver all the information required. Another unique feature that made the dB5 stand out from the crowd was the clock mounted in the dashboard’s center. The specifications of this beauty were as under:

Although made popular by James Bond, this timeless vintage car is a beauty personified and a stagger. No surprise that it is still so sought-after car by vintage car collectors.

This rock-solid muscle car was built by the Chevrolet in 1966 for 1967 with two models, RS and SS. The word Camaro means friend in French. Chevrolet Camaro combined tons of personalization options blended with high-performance mastery. The muscular design of the Camaro was an instant success with the masses. The option to personalize the car made even more sort after machine at that time. It had sleek doors and sharply angled doors, quarter panels, fenders, fake louvers, triple pod taillights, and new fascia. Besides this, there was also a plastic endure front bumper matching the car’s color, and a cowl induction hood was also available. Overall the car was a muscular killer; here are the specifications of this style icon vintage car.

The Camaro was manufactured to open the Chevrolet’s entry to the pony car market, captured well by ford mustang.

If you want the get an idea of how popular the ford mustang Shelby was when it was launched, you must see its staggering sales figures. Upon its release in 1964, a whopping 22000 cars were sold like hotcakes on the first day of the launch, and within half a year down the line, a record 100000 GT350 cars were brought by the Americans. Such was the popularity of this iconic US vintage car. But the management was not satisfied with these amazing sales figures. It wanted it to be popular and in demand forever. Here is when the master of the art, Carol Shelby, came to Ford’s rescue. To help, Shelby ford shipped 110 k Code fastback mustang to Los Angeles, where Shelby was residing. All these mustangs were delivered without having rear seats, hoods, grills, emblems, or exhaust systems.

True to his words Shelby and his team made 100 modified 1965 GT350 Shelby Mustangs ready for inspection by SCCA. These newly minted models were strikingly amazing, all fitted with Guardsmen blue, Wimbledon white stripes, fiberglass hoods, and Shelby badging. These other added features were an open grille, hood-mounted air scoop, GT350 rocker panel striping, exclusive fiberglass front apron, and 15*7 inch wheels covered in Goodyear blue dot tires. Many modifications made this car an instant success. Here are some of the specifications.

The 1965 GT350 Shelby Mustang was indeed an iconic car that was a rage at that time, and indeed it is still so popular now.

The Lamborghini Miura was the car that revolutionized the car world. The design was indeed groundbreaking for its time. The enrapturing eyelashes design of the headlight, V12 main engine, and two-seater sports design all contributed to its fascinating body. Such was the popularity of this design that it was the fastest production car in the world at that time. The top speed of this enigmatic car design was 280 km/h or 174 mph, which can reach 0-100 km/h in 6.7 seconds, which made it one of the fastest cars of that time.

The V-12 Miura design took the Lamborghini brand to a whole new level. This hypnotic design changed the concept of driving a car into a feeling of luxury and thrill. The windshield of Miura dramatically swept back and the car’s wider hips mounted with roofline trail gave it a dashing look. The interior cabin of the car was breathtaking. There is a large Jaeger speedometer on the left and the right, the tachometer seated between twin pods. The switchgear and secondary gauges were beautifully placed in a hooded stack. The car was loaded with such astonishing features. Unfortunately, the specification of this car is as under.

The Lamborghini Miura is indeed a classic beauty and iconic car of this world. It has indeed revolutionized the sports car industry altogether.